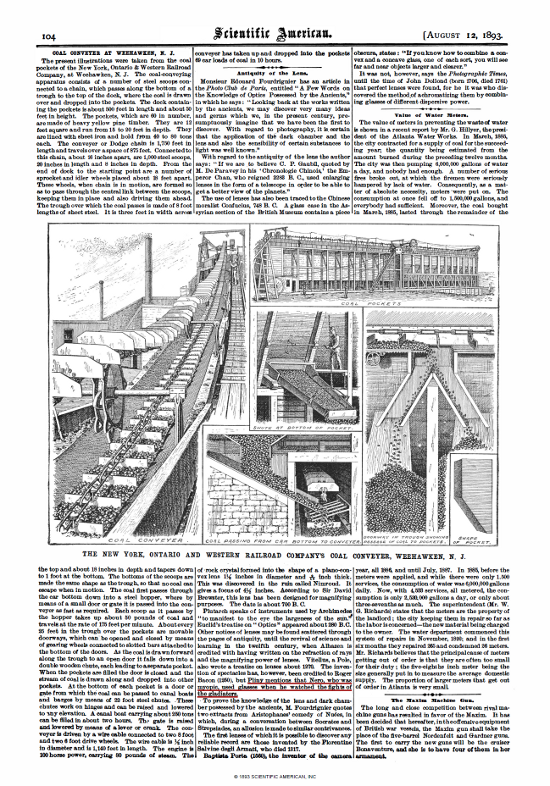 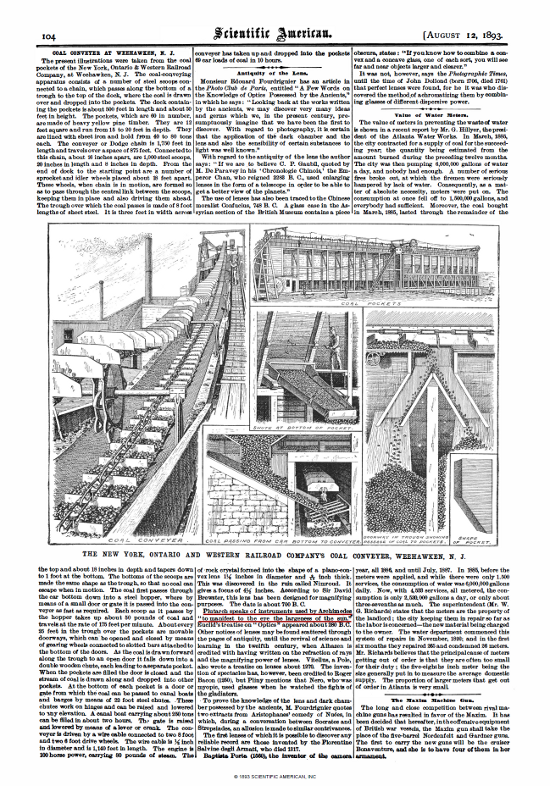 A glass case in the Assyrian section of the British Museum contains a piece of rock crystal formed into the shape of a plano-convex lens 1 1/2 inches in diameter and 9/10 inch thick. This was discovered in the ruin called Nimroud. It gives a focus of 4 1/2 inches. According to Sir David Brewster, this lens has been designed for magnifying purposes. The date is about 700 B. C.
Anonymous, "Antiquity of the Lens," Scientific American, vol. 69, no. 7 (August 12, 1893), p. 104. 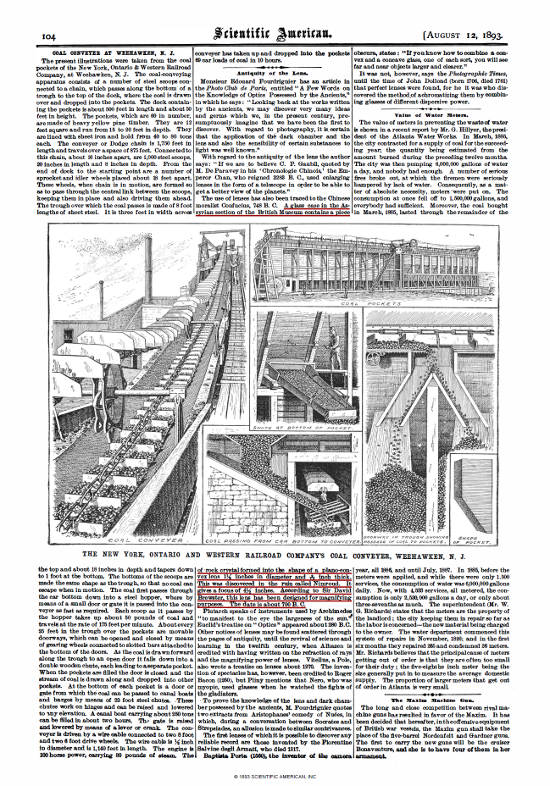 Confucius and Lenses in Ancient China 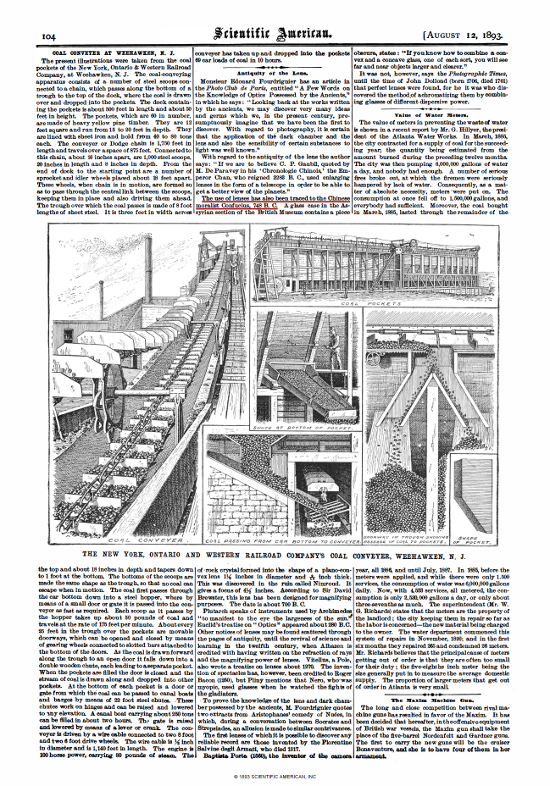 The Lens and Telescope in Ancient China

With regard to the antiquity of the lens the author [Edouard Fourdrignier in an article in Photo Club de Paris] says: "If we are to believe C. P. Gaubil, quoted by M. De Paravey in his 'Chronologie Chinois,' the Emperor Chan, who reigned 2283 B. C., used enlarging lenses in the form of a telescope in order to be able to get a better view of the planets."
Anonymous, "Antiquity of the Lens," Scientific American, vol. 69, no. 7 (August 12, 1893), p. 104. 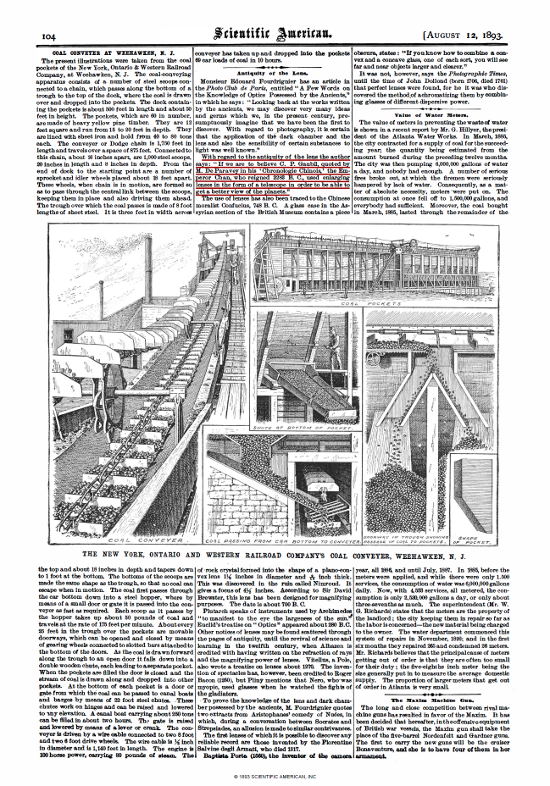 Possible Meaning of the Character for Di/Ti of Shang Di

Many explanations, of great variety, have been given for the origin of the word Ti. We shall not try to go into all of them here. But there is one of these theories which, whether it be correct or not, is at least the most plausible one that offers. It was first propounded by Mr. James M. Menzies, a Canadian scholar who is one of the very few foreigners who have made real contributions to the study of the oracle bones.
According to this theory Ti was originally the name of a sacrifice. This statement is based on the fact that in Shang dynasty Chinese the word Ti is almost (sometimes quite) identical with another word, pronounced liao. This word liao is a pictograph of a bundle of wood, burning, ready to have an animal placed on it as a burnt offering; it means ‘to present a burnt offering.’ Since these words are so nearly alike in form, we have on the oracle bones such sentences as ‘liao (present as a burnt offering) five bulls to Ti,’ with liao and Ti written identically. It is thought, then, that Ti was at first merely the name of a way of sacrificing to the ancestors or other deities, but that gradually men confused the sacrifice itself with the deity sacrificed to, and came to think of it as a separate deity.
Creel, Herrlee Glessner. The Birth of China: A Survey of the Formative Period of Chinese Civilization. London: Jonathan Cape, Ltd., 1936, p. 182.
Posted by Unknown at 10:01 No comments:

Lepcha Tradition of the Tower of Babel

There is also a tradition of a tower of Babel built at Dharmdin; it had nearly reached the moon, when word was sent down to send up a hook to throw over the horn of the moon: this command was misunderstood, and the people below cut away the foundations, so the building fell and killed numbers: a mound of stones and potsherds is shown to this day, and the tribe concerned (now extinct) were called "Na-ong" or "the blind fools."
Bengal (India) Secretariat, eds., The Gazetteer of Sikhim, intro. Herbert Hope Risley, Calcutta: Printed at the Bengal secretariat press, 1894, p. 42. 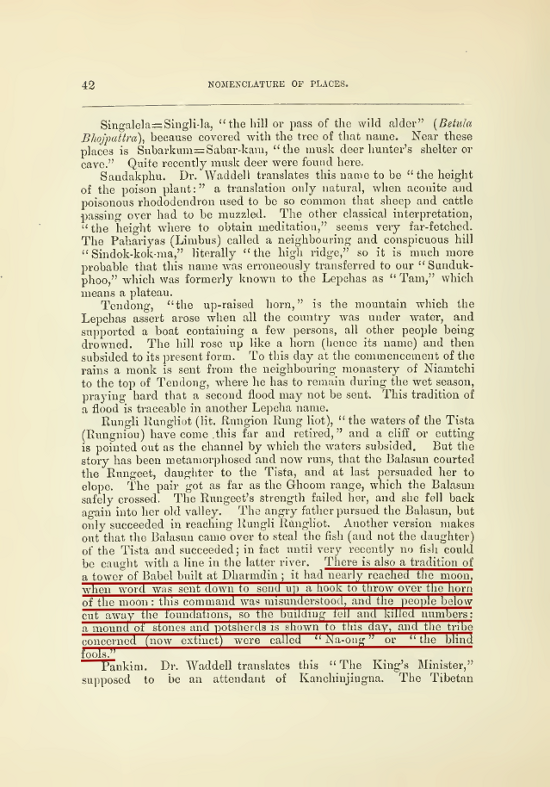